BLACK BOX V8
This version of Black Box has a speech synthesizer so that your Commodore 64 to speak with a human voice (the fact is that this Polish speech synthesizer, but has features which enable speech in other languages. It also has a powerful music features.Black Box v. 8 makes it easier to work with a computer, expanding its capabilities (including 31 additional commands BASIC) and speeds up the work with a tape recorder. Cartridge includes a new version of Turbo, with more opportunities than ABC-TURBO and TURBO-ROM, and also fully compatible with other existing versions. Lead-section of the strip is very short, belts and sounds make it easier to work with a tape recorder. In addition, presents information about the start and end address.
BLACK BOX allows you to quickly copy and verification.
Cartridge includes a program to set the Datasette head, that allowing the correct load games and programs.
TONES OF MUSIC command changes the C64 keyboard music keyboard.
Each command consists of a blackbox ← and letters in the case of “YES TONES OF MUSIC” will be ←YT approved return key.
The rest of the commands, keyboard shortcuts, along with descriptions and examples in the accompanying user manual (in English).
Black Box v8 also has the ability to access low-level assembler functions described in the manual. 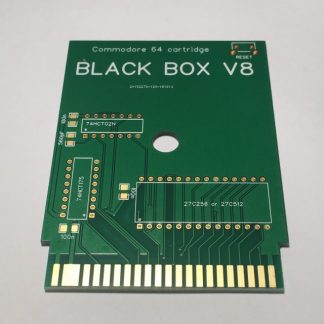