Most low-end Amiga models only came with Chip RAM. “Big Box” models allowed for a different type of memory to be installed, known as Fast RAM, where fast means that it’s dedicated to the main processor, so that it doesn’t have to compete with the other chips in order to gain access to it (as is the case with Chip RAM). While both Chip and Fast RAM are limited in size, you can have at least a few MB of the latter on all Amigas (usually up to 8), while the former can never exceed 2 MB.

OpenAmiga600FastRamExpansion will allow you to add 4 MB of Fast RAM to your Amiga 600. This way you will be able to run more applications at once and more quickly. If you combine it with a chip RAM expansion, you will also be able to run almost all games supported by WHDLoad, pushing the smallest of the Amigas to its limits. The Fast RAM will be mapped to $200000-$5fffff, which means it will not interfere with the PCMCIA address space.

Note that the A600 was not originally designed to support a Fast RAM expansion, which means Commodore didn’t provide any connector for it. In theory it could be sandwiched between the CPU and mainboard, as usually done on A500s, but in the A600 the CPU is soldered directly to the mainboard and cannot be removed. Thus the only way to install it is to clip it over the CPU, using a PLCC socket placed upside-down. PLCC sockets are not meant to be used this way, so this is really a bit of a hack and might not even work in all cases. Space around the CPU is quite limited, hence the odd shape of this board. 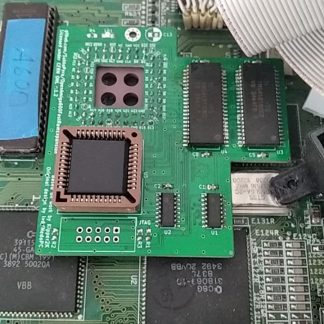