The Epyx Fast Load is a floppy disk fast loader cartridge made by American software company Epyx in 1984 for the Commodore 64 home computer. It was programmed by Epyx employee Scott Nelson, who was originally a programmer for Starpath[1] and later designed the Epyx Vorpal fastloading system for the company’s games.

Epyx Fast Load allows programs to load from the Commodore 1541 disk drive at 2500 bytes per second, approximately five times faster than the normal speed.[2] Since it is stored on a cartridge, and thus provides instant access without requiring any hardware modification of the C64 or disk drive, the Fast Load quickly became a very popular peripheral among C64 users.

In addition to disk acceleration, the cartridge also provides a built-in version of the Commodore DOS Wedge. This dramatically reduces the number of keystrokes needed to load or save files or perform disk operations, and makes the cartridge even more convenient.

Epyx Fast Load incorporates a machine language monitor. Although it does not include an assembler, as most “standard” C64 ML monitors do, it includes a wide array of powerful debugging tools. These include disassembly, single-stepping, and an automatic machine code relocator.

A crude disk editor is also included with the cartridge, which displays raw data from floppy disks in classical hex+ASCII split screen mode. Among other things, the disk editor can be used to enter cheat codes and do the home computer variant of ROM hacking.

In the unusual case of software that doesn’t work with the Fast Load, the cartridge can be disabled via a menu command, thus avoiding the need to physically remove and reinsert it.

While the original 1984 version of the Fast Load will not work with the SD2IEC floppy drive emulation system,[3] newer variants of the cartridge do support it.

Be the first to review “EPYX Fastload Cartridge” Cancel reply 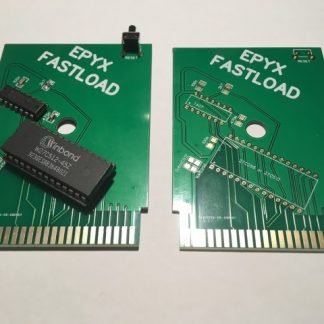